Hard decision but had to be done 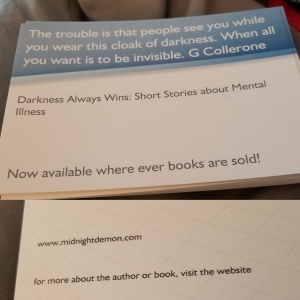 I had an upcoming appointment with the LGBT clinic for going forward with the transition. A month or so ago the doc had called me wanting to talk to me about making sure my pain was well controlled before starting testosterone. I wasn’t hopeful that things were going to move forward and I had already made plans for my demise. The following week I had the pain doc appt and was told of the med change. I am still fricken waiting for the med change so I figure why bother going forward with transition when a) my pain isn’t going to be relieved and b) I am just going to die anyway. I canceled the appointment. It was extremely hard and didn’t think it affected me until I wrote it out in a tweet. I started crying at the loss that I will continue to be someone I am not.

It hurts more than my CRPS pain to continue to live in this stupid effing body. I know testosterone wouldn’t change my bone structure and even with phallic surgery, I would still be a female. I just hate that I won’t have more facial hair and other stuff to make me a male.

I been having a rough day with pain. I am so tired, physically, from dealing with it. I forced myself to go to the grocery store for some pulled pork. It was well worth the pseudo asthma attack I got with the stinking pollen. I had to have my cousin take me home because I knew walking just wasn’t going to happen. I would hurt so bad and I knew my breathing would have gotten worse. Even while I was home, I showered and I was wheezing while drying off. I had to use my mother’s inhaler to clear my lungs. I’ve never had allergies this bad before. I know the pollen is bad, which doesn’t help. I do take an allergy med and a nasal spray, which I didn’t take this morning. I should have but I usually just take it at night. I honestly didn’t think nothing of it until I was having trouble breathing and I got so congested that I am nearly puking my iced coffee.

Pain was so severe while I was home. I’ve been taking my pain meds but not the strong pill. Mostly because I haven’t had a bowel movement since fricken Sunday. Never fails that I am regular for a few days and then everything stops. I am hurting so bad it is hard to breath. I am just so full and uncomfortable. I had two sandwiches of pulled pork and a chicken cutlet for dinner.

For some reason I was craving pineapple juice. I went downstairs to my sister’s to steal some. I also checked the mail. My correct postcards for my book promotion came in the mail. I posted a pic on Facebook. A dear friend was kind enough to say send her some and she will distribute them where she lives. She works in the mental health field and is so supportive of everything I do. We met ten years ago at a conference and became instant friends. It was funny, we were in a session panel and there was a speaker with a thick accent. I think she was Danish or some European country. I don’t know exactly. We both liked the accent, though it was hard to hear her. We made notes to each other on the notebook that the association had given to us. I still have that notebook with our notes! HAHA. We were just some weirdos that clicked really well.