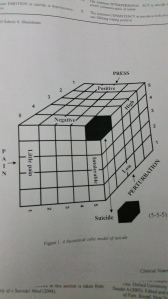 I have been having pain (yes, once again) and it has brought out the suicidal feelings once again. I had this insane idea to take a pic of the means I want to use and send it to my psychiatrist. Lately, (or maybe fortunately) I have been holding off on sending her an email unless I think it through. I thought of the consequences and it would be a huge deal and almost certainly, cause me to be in the hospital. I held off after talking with a friend on Twitter. We instead talked about other things while my heart was feeling like it was being stabbed a thousand times. She told me about her boyfriend wasn’t going to get back with her and I felt immensely sad for her. She and I had been hoping they would get back together again but I guess it isn’t meant to be.

I fell asleep for an hour and woke up with my elbow hurting. I somehow had fallen asleep in the nook of my arm and my elbow didn’t like it. My friend had sent me a message again and we talked. I felt so messed up still. Her meds kicked and she wished me good night. I was left with my thoughts. I again thought about sending her the pic of the means. Instead, I wrote to her about the struggle I am having and also sent her a pic of the cubic model of suicide. I told her where I was on the scale. I told her the father of suicidology, Dr. Edwin Shneidman, had never really written on chronic suicidality and what to do about it. He just wanted to decrease the psychache and you decrease the suicide. I told her this and also that there is no anodyne to help with the psychache. I have no idea if she will understand all this. I told her I probably need to go in the hospital but my sisters are going away for a few days and if I go in, my mother will be left alone, which would not be a good thing. My nephew will be here but he wouldn’t know what to do if her sugar went low. He has never seen her when her sugar is low and I am sort of protecting him from that. As much as I hate this woman right now, a low sugar and the other potential that could happen would make me so fricken guilty I wouldn’t be able to stand it. Yet here I am wanting to fucking die…jesus I am messed up.

In sort of closing I told her I wanted to push her away so she doesn’t see me like this. I hate having her see me like this. I don’t recall a time when I have been like this for so damn long, well sort of. I was like this 25 years ago, a few months after I graduated high school. Unfortunately then, she was on maternity leave and when she was back, I was in the hospital for a long stay. I fear that once she reads the email, I will be asked to go to the hospital anyways, even though I explained the situation with my sisters not being available. I told her I don’t know if I can hang on till then. I also fear that she won’t give a shit and just hospitalize me involuntarily if I don’t go in voluntarily. Either way I will be sectioned. If I do go in, I hope that it is on the unit I am familiar with. If I do end up there, I hope I don’t have the “team” I had a couple years ago. They are the worst team ever and don’t help you at all. They dance around like they are but once they ignore the can you help me with this and be told we will deal with it tomorrow but it never does; then they ask when would I like to be discharged and I say okay tomorrow. Fuck you too. Nothing gets done there but it will possibly give me some space away from home enough to gather myself up so I can bear living in this hell hole.

I checked my blocked text messages tonight and found that my ex texted me Apr 30 asking for me to send her my books. She was in the hospital after a suicide attempt for 3 weeks and someone stole them. Yeah, okay. Like she can’t go to Amazon and get them or a bookstore? I mean really! I know she just wants to get back in my life in some way shape or form but it isn’t happening this time. I am done with her. She broke my heart long ago and she can’t mend it. Part of me wants to respond but I know if I do, it would be a huge mistake.

I had emailed the social worker the beginning of the week to find out about therapy. I still haven’t heard from her. It would be nice to talk to someone as I feel like such a burden to my psych right now with my craziness. I hope to hear from her sometime today. It is 415 right now so I think I am going to try and go back to sleep.

Today my therapist asked me if I was suicidal, or specifically, if I was having suicidal thoughts. I had to think about it for a few minutes before answering. And the answer is not so much. I haven’t sat down and thought about killing myself in a few weeks now. I am not saying I am no longer suicidal because that would be inaccurate. If given the chance, I would act on a suicidal plan in a heartbeat. It’s just that I am not thinking about it all the time anymore, 24/7. Then she asked me about my perturbation, press, and psychache, the three P’s of the suicidal cubic model. When all three are at a 5, suicide is imminent. Over the last few years I have ranged from a 4-4-5 to a 5-5-4. Always close to killing myself but not quite there. Granted there have been times that I needed to do something to get rid of the pain so I would self-medicate, usually. But lately, I haven’t been perturbed. I haven’t been feeling press. And my psychache has only increased due to my transgender issues. It varies. Some days it is worse than others.

My suicidal thoughts are also partly dependent on my physical pain. I haven’t had a bad pain flare up in the last few weeks. I had pain today that prevented me from going out, again. Seems I have been waking up in pain the last few mornings and I am not liking this. It just ruins my day. I really wanted to go see my therapist today, and I would have if my stupid foot wasn’t hurting. It makes me depressed big time but it doesn’t necessarily make me suicidal all the time.

I have not been in a dark mood in quite some time. I am fearful that it might come back. I am trying not to be too hopeful about things because I know things are always going to suck no matter what. Like my editor not getting back to me is putting added stress on me. I know that she hasn’t gotten to my book because I am a bad writer, but I can’t help but feel that way sometimes. I am hoping she gets to me this week, after her day off. I am really, really disappointed that I am not going to be publishing the first week of April. I had wanted to get a few books out to the AAS conference in Los Angelas. But now that doesn’t seem likely either.

I feel like I have a fractured ego right now, that one wrong thing someone says to me and I will have a meltdown of some kind. I just feel a pressure building up and I don’t know where the release valve is. Right now things are ok, but I am sure any stress thrown in my direction is going to set me off. I guess that is why I have not thought about a suicidal plan. It would be too tempting to have one in place should I have a meltdown.

Also my therapist wanted to ask me a question about my transgender stuff but we ran out of time. I am kind of glad because we have been talking about that most of the week. I am glad next week we don’t meet three times. She wants to meet with me any time she has an opening. But next week I have appointments for myself and my dad. I am not looking forward to my appointment as it is with my PCP. I also have an appointment with my neurologist this week. That appointment is a joke. She meets with me and just tells me to join yoga. Not happening. We also talk about other stuff. I am going to bring up my neck hurting me and my hand/arm falling asleep. It has been happening a little bit too much for my liking. The weird part is that I will be sleeping on my left side when my right arm falls asleep. I hope I don’t have herniated discs in my neck. That will suck.